Happy 4th Wedding Anniversary to us.

This photo is from 2009 when I was 7 months pregnant. Can you see my baby belly? and my extra chubby cheeks? But don’t we look happy?

2 years later, I am just as happy.

We are not celebrating today- J is feeling under the weather and we don’t have  a sitter, but we are planning on doing something fun to celebrate this weekend.

October 1st and on cue the weather turned crisp and cool.  Saturday was sunny and clear, with highs in the low 60s. J and I headed out to the Fox50  Family Fest for the annual duckie races down old bull river. Old Bull river is the canal flowing through American Tobacco Campus, one of our absolue favorite spots in Downtown Durham. 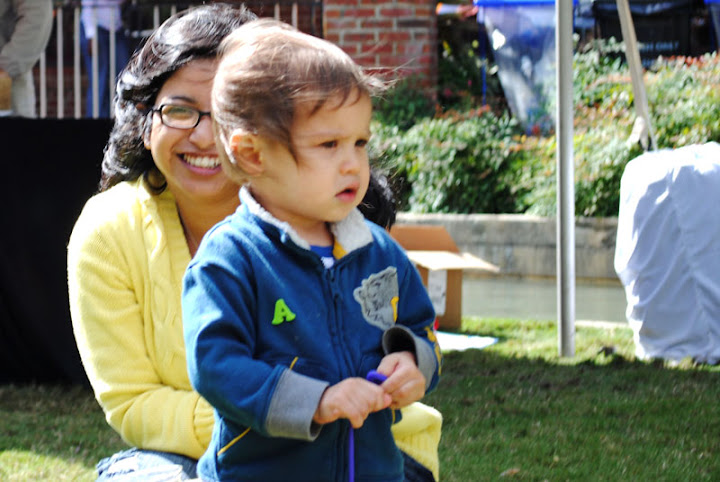 At the Family Fest Rubber Duckies are raced down our little canal to raise money for local non profits. This annual race has been going on for years but this was the first I’d heard about it so it was a brand new experience for us. really is a community affair- high school marching bands, wildlife rescue centers, alternative arts and craft supplies- these were the exhibitors and entertainment. Nothing fancy, nothing elaborate- just regular Durham families spending a day out in the autumn sunshine.

One the big attractions were the animals from Noah’s Landing Mobile Nature center. Bun adored the animals on display. He touched a baby alligator, petted a exotic wild cat from Africa, spent 20 minutes just staring at the owls. We also ran around on the grass, played with bouncy toys, drank beer, ate super garlicky fries. Cheered the bright yellow ducks as they made their way down the river.

We brought home a tired baby who went to sleep immediately. J and I had a mellow night where we sat out on our deck (mosquito free, since it was so cold) and spent all night talking. A date night and a family day all in one. A much needed break from our daily grind.

This is my first Blog Meme- I’m so excited and also a little nervous that I might mess up the code for the button or mess up the link up. But here goes. I found this meme on Adventuroo, a blog of a NC mama that I found and started following on twitter. I decided to start a meme so that it would force me to have assignments and stay accountable to my blog. This week’s assignment was to take a picture of something we couldn’t do without.

Before J and I became full fledged grown ups we lived in a series of apartments that did not have a dishwasher. At first, it didn’t really bother us that much because we were so poor we used one pan to make mac and cheese or Ramen Noodles. Slowly though we started cooking big elaborate meals and the dishes would pile up in the sink and it was probably one of the biggest triggers for fights in our marriage. When we made our last move into this house, we knew we absolutely needed a dishwasher. And now I use that dishwasher almost everyday filling it with sippy cups and snack bowls and brightly colored plastic spoons. And J and I still fight, but never about dishes.

7:30 AM in our kitchen as I warm up some milk for the Bun and J packs his lunch

J: Hey, I have to ask you for a favor

J: Can we not have noodles for dinner tonight? I have now had dinner for 5 meals straight

Yikes!!!! I didn’t even realize that. We had my version of Dan Dan noodles on Sun night, Chicken and Pasta on Monday night and last night we had spaghetti and meatballs. Also J took leftovers for lunch. I didn’t plan it this way, clearly if I was planning out my meals I wouldn’t have made noodles three nights in a row. J, Bun and I try to eat dinner around the same time and noodles is something that Bun used to eat and I guess I focussed so much on toddler food that I forgot about adult taste buds. Somebody help me break out of my noodle rut by giving me some easy dinner ideas that are toddler friendly. I guess it doesn’t even have to be toddler friendly, since Bun has decided to go on the cheerios and grapes diet. It just needs to be easy, quick and noodle free. Help!

Is one of my favorite comedy Sitcoms on TV right now.

And also the only title I could come up with for this entry. I ‘m terrible at titles. We have had fabulous weather in these parts (Up until today of course, its now cold and cloudy as I write this) and we had the added bonus of J not having to put in any work hours this weekend. Family time ensued. We grilled, went to the park twice, checked out Kidzu on Franklin Street. It was mellow, relaxing and lovely.

We kicked off the weekend on Friday afternoon with a play date at one of my favorite parks in Durham. Morreene Road park is a small park and most of the park is taken up by the large sprawling play structure and there are foam mats underneath. There are also large ramps that are wide and low to the ground- perfect for toddlers to run on. Also there is one big slide and 3 or 4 small ones, again perfect for toddlers. The swing set too is very baby friendly. As an added bonus, there is a tennis court right next door and Bun just loves to run over and watch the balls flying the air. The fence is pretty high so I don’t really worry about the balls hitting him.

This is pretty much what we played with the entire time on Friday afternoon. The boy loves wheels.

He was finally persuaded to swing a little bit right before we left the park.

Friday for dinner we had awesome grilled chicken kebabs in a greek marinade thanks to my very talented grill master – J and his trusty assistant. Bun even agreed to eat two whole chunks. I’m amazed every time he eats chicken.

Saturday was a little bit colder but we decided to head back out to Morreene Road park again because J wanted to check it out for himself. This time there were lots of kids running around and Bun just wanted to watch them. When he finally felt like he was ready to play, he went on the big slide with Dada

He also went down the slide on his own for the first time- We taught him to lie down on his back and slide down and of course we were right there to catch him. And of course we had him go down the littlest one.

Bun wasn’t really as impressed with this concave window thingie as I thought he would be.

And finally, it was time to head home and J was very upset about having to leave the playground.

Finally, On Sunday we went to check out Kidzu the children’s museum in Chapel Hill but I committed a double sin and left my camera and phone at home so we have no pictures. I’ll just have to take Bun back there again and do a blog post then.

This week I’ve had the blues about how I don’t have a perfect, fairy tale life where everything goes smoothly all the time. But then I come across this and knowing that I had this moment, I’m willing to deal with any number of imperfections for a few moments of perfect joy.

J and Bun and I are lucky enough that we get to spend time together as a family and do fun family activities, and eat dinner together and take strolls. But on a day to day basis, our lives are somewhat chaotic: we have crazy weeks, where we try to balance schedules and coordinate pick up times and try our best to stuff food down our face while the Bun is distracted and trying to pull the dog’s tail.

Not that I’m complaining, I know I have it so much easier than other people, I have a lot of help from my parents and we have a great support network of friends but every once in a while we have a day where the planets are so perfectly aligned and we have one of those sitcom family days. And since I bitch and moan about all the bad, its nice to blog the good.

Yesterday was a perfect day, it was so perfect that it felt like it was happening to someone else.  J went to work early enough so that he could find a free parking spot and so I didn’t have to drive him to work. The Bun ate breakfast and napped right on schedule. After nap time I managed to make it into two grocery stores and my mom’s apt without him fussing, crying or throwing a fit.

There was a blissful 1 hour nap for both mommy and baby. And right at 5:30, just when I was getting ready to take dinner off the stove and Avi was finishing up the last of his dinner, J walked in and said “Honey,I’m home” and planted a kiss on me while dipping me dangerously and then smacking my ass. It was straight out of a 1950’s TV shows . OK so he didn’t really dip me.

He played with the baby and dogs while I finished dinner and then we actually* gasp* ate dinner together while the Bun happily played at our feet. (I know its like an alternate universe right?)

The Bun went down right at 8pm and slept all the way until midnight  giving J and I  a chance to ummm…indulge in…ummm… relations and cuddle and I actually went to bed before midnight! Woo hoo!

My takeaway from all this is- It must be nice living this life all the time. I wonder what I can do to make days like this happen more.The only dark cloud on my day was that Angelo didn’t win Top Chef, but hey a girl can’t have everything.

Sep 2004- J and I broke up for a week after having lived together for 3 weeks. Yep it was that hard, but I’m glad we got back together again

I guess mission Durham is complete.

We now have a whole crop of new challenges ahead of us though, mainly, what happens next. We both really really want to stay here and not move but with the economy being in recession, it might not be in our hands.