Earlier this week J, Bun and I were getting ready to head out and run errands. And while I was getting ready, I asked J if he would help Bun get ready. Father and Son came up with this outfit. Although the boots, belt and hat are all Bun’s pick! I have to say, I kinda love his style! He is wearing Khaki courdrouys (my pick) Red Shirt ( My pick ) Grey Stripe Cardigan(J’s pick)  J’s belt looped around cardigan, Green Rain boats and sailor hat (Bun’s pick). We did convince him to take off the belt before we headed out of the house because I really didn’t want to deal with it falling down, once we were out and about.

The pics are super blurry because he would not be still and we were in a hurry to get out the door.

P.S Please not that the boots are on the wrong foot and he would not let us fix it. He put them on himself after all

Summer is winding down in NC and it feels like its going to be an early fall. This week has just flown by- doing nothing in particular but also things that take up a lot of time- grocery shopping, doctors appointments, ikea trips (2hr drive for us). But what I’m going to remember from this week is our impromptu picnic with some of Bun’s stuffed furry friends.

We took our lunch of pb & jelly sandwiches, cheese crackers and grapes and yogurt and sat outside, in the grassy area outside our front porch. 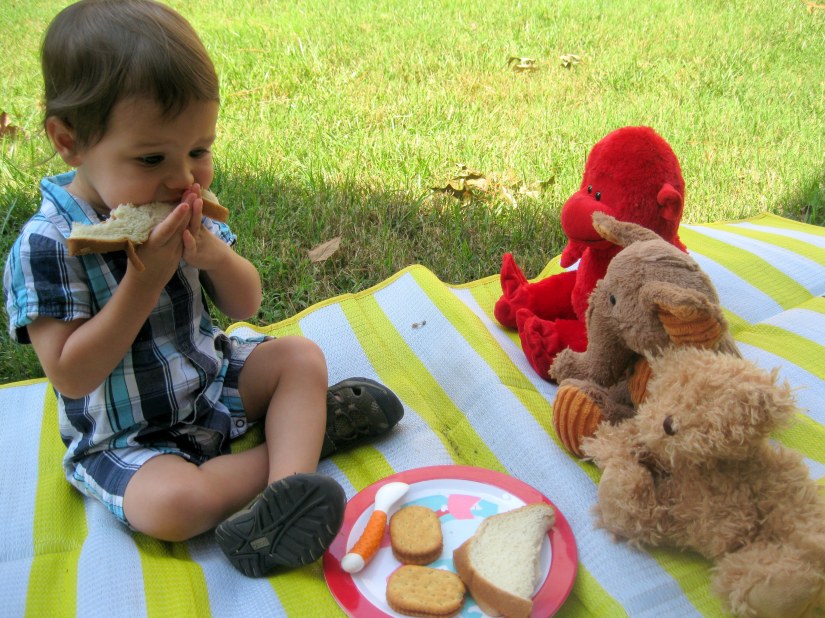 I think Monkey and Haathi wanted some of his yummy sandwich. It was rather rude of us to not give them any after inviting them to our picnic

And then Bun  gave Haathi a big hug

But kept the sandwich for himself

Photos are kinda meh, but Bun and I still had a lot of fun. Also looking at the photo

No this post is not about my relationship with shoes. That one is pretty straight forward- I love them. Always have, Always will. Hate, dislike, ambivalence, doubt were never words for that relationship. 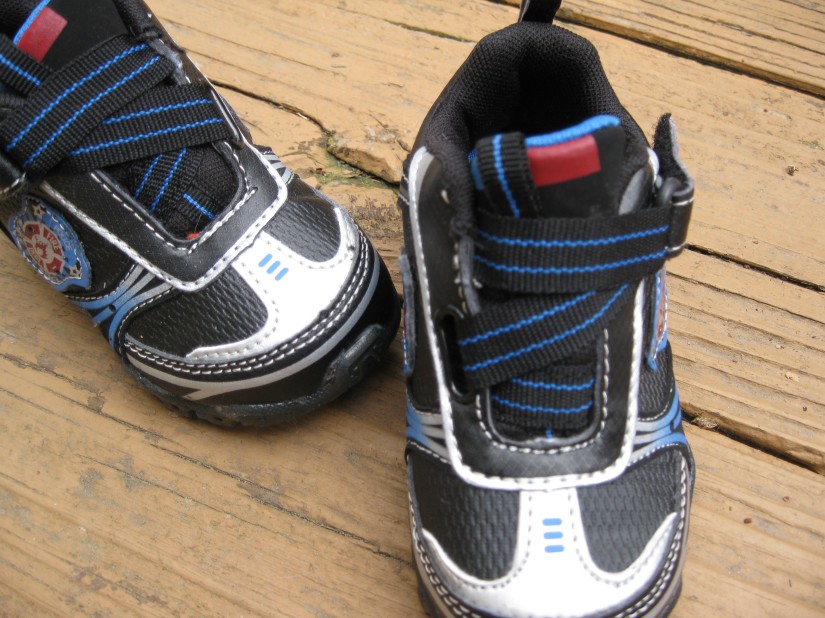 No this is about Bun’s complicated relationship with shoes or joooewz as he calls them. On one hand shoes is one of his favorite words right up there with Dog. In fact it’s his go to word in a pinch, whenever he wants to have a conversation with me and runs out of his limited vocabulary, but wants to keep talking he’ll randomly say shoes, you know just for kicks. I cannot pass by the shoe aisles at target or payless at the mall without hearing a rendition of “joooewz, joooewz, joooewz” chant. Also, he now knows that if I want him to wear shoes, its a good bet that we are going out. Another very favorite word and activity.

Once he actually has his shoes on and pointed at them, giggled and been left alone with them, the hate part kicks in. He is adamant about taking them off. I’m forever putting them back on when I get him out of the car seat. But things came to a head last friday. I was meeting an old friend and we had to swing by Walgreens to pick up a prescription and run a few errands. Somewhere between Walgreens and the errands Bun had managed to take off his shoes and lose them. Yes lose them. They weren’t in the car or in any of my bags. I could not take my kid to a play area without shoes,so we had to add Target to our list of stops and pick up a pair. And the cycle continued, he was thrilled while we looked at shoes, tried them on, paid for them, left the store. I put them on him in the car and of course when we pulled up to Panera and I went to get him out of the car seat, the shoes were off.  He smiled at me and said “joooewz” 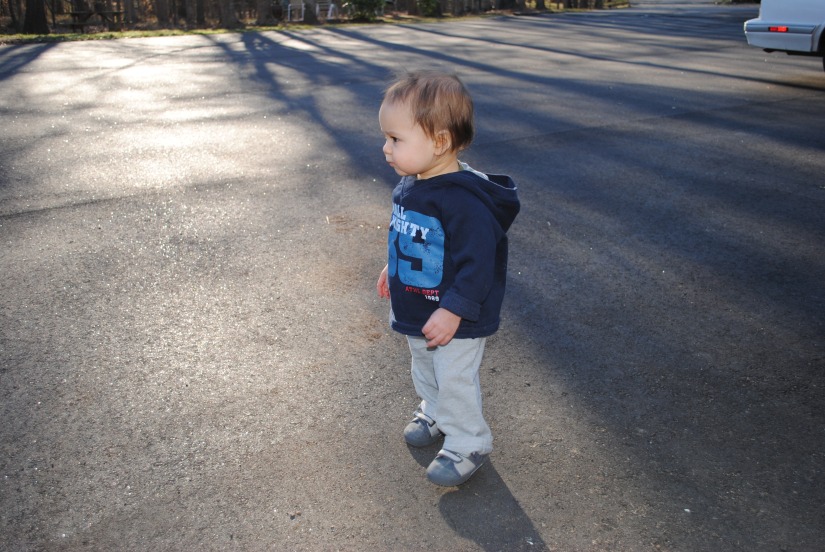 Saturday afternoon Bun and I were hanging out in the front of our townhouse, getting into our usual trouble when a little boy maybe seven or eight walked by us walking his chihuahua. Bun was naturally thrilled and raced over towards the “doh” as he calls it. The little boy stopped and helped Bun pet the dog and told me the dog’s name and and spent some time playing . And finally it was time to say “buh buh” and “taaaaaaaaaa- ta” Just as the little boy and his dog was walking away he turned around came back to me and said this

There’s a car headed this way, you might want to be careful with him (points to Bun). I can’t see the color because the sun is in my eye, but I thought you should know.”

All I managed to say in return was “Thank You for giving me a heads up” How sweet for a little 7 year old to look out for some neighbors he has never met before. I hope Bun grows up to be this little boy.

Last weekend the Bun figured out how to roll his car along the coffee table. It was so strange to see him go from being a baby to a little boy in those few minutes. He is probably hardwired to like cars and trucks and dirt and mud and all those awesome boy things. He is slowly but surely stepping into toddlerhood. 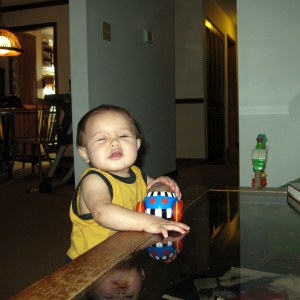 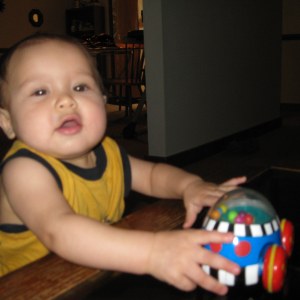