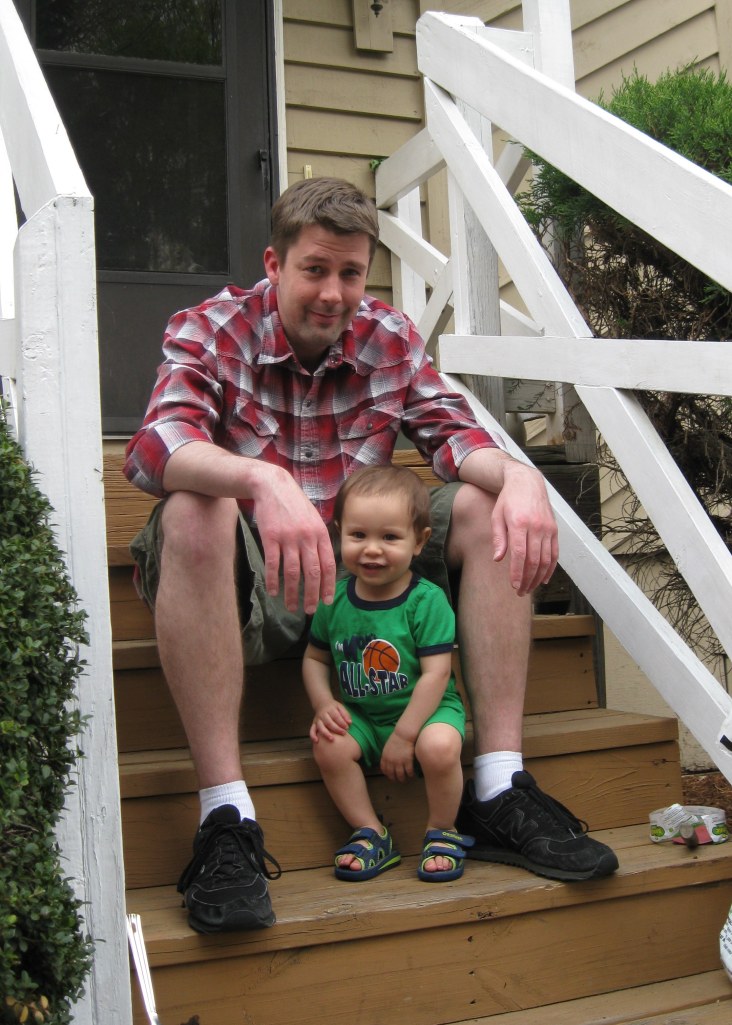 Some afternoons are just magical.  Simply because its spring. Because there is sunshine. Because I’m outside with my little family.  Because my boys are looking so handsome. And because they are smiling at the camera at the same time. Because a little boy is playing with a ball with his daddy. Because sometimes you don’t need a reason to be happy. 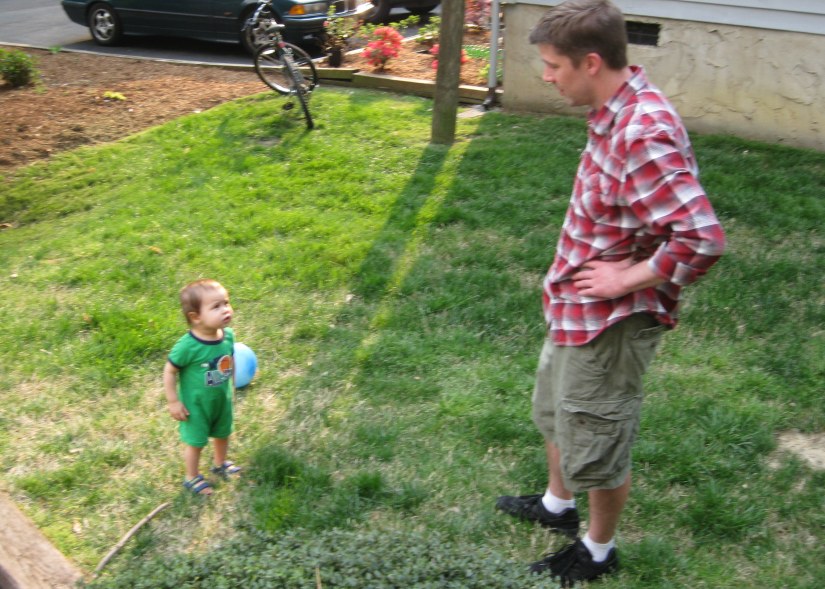 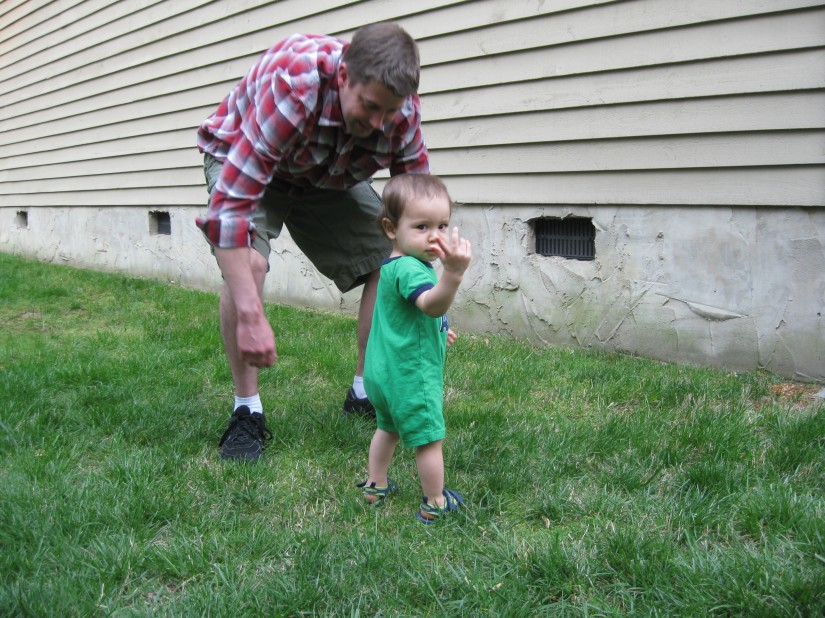 Because This picture of him looking at me makes my heart feel double squishy. 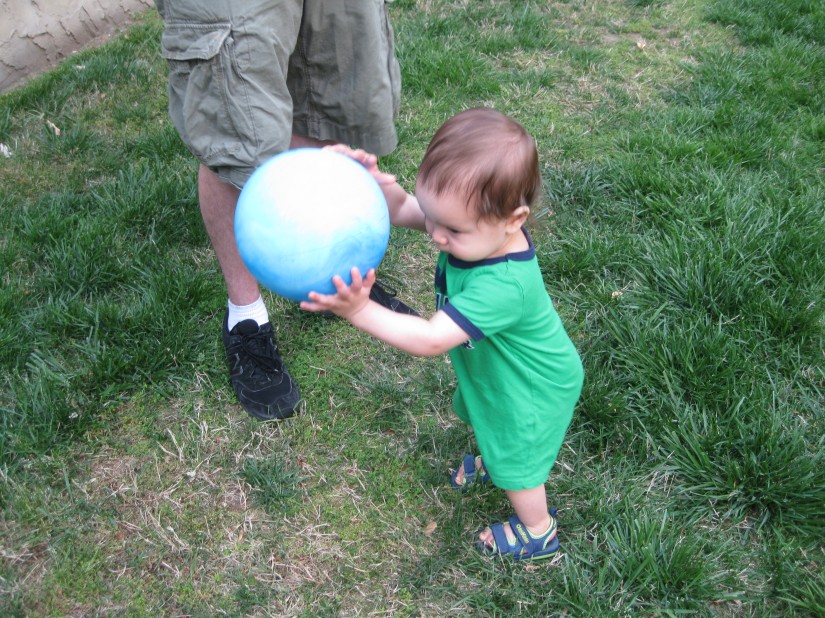 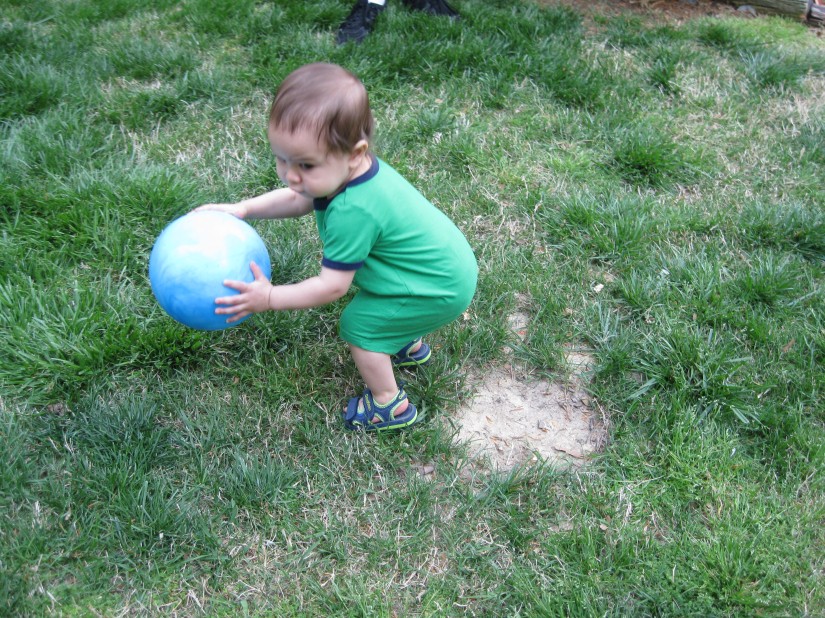 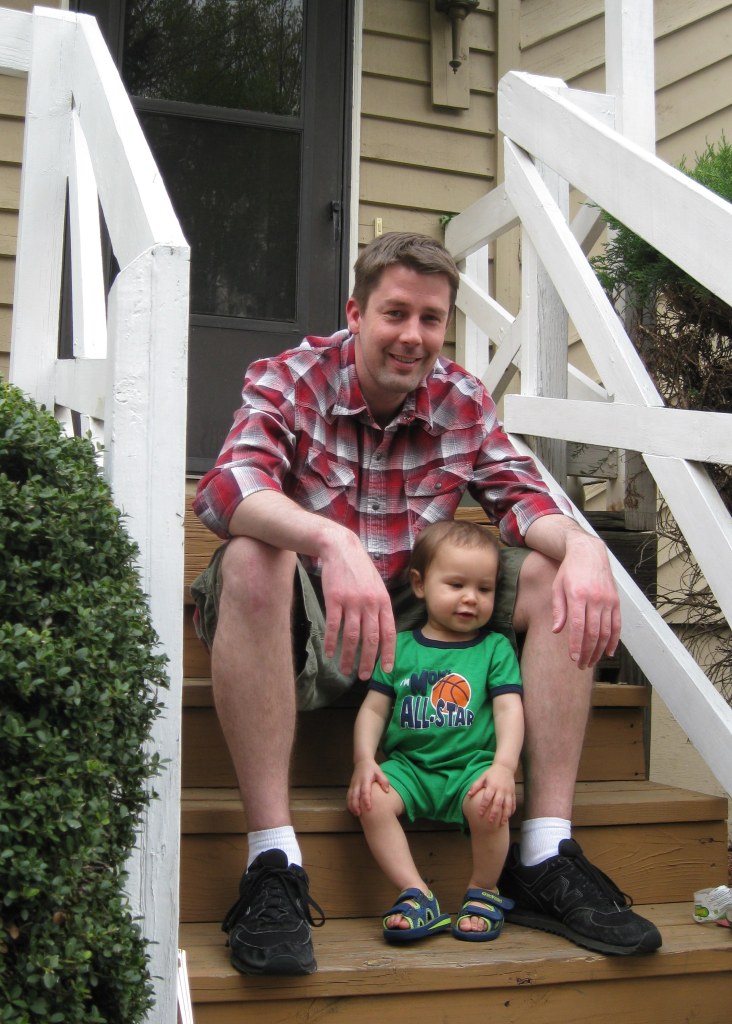 Because these guys make it so easy to be happy 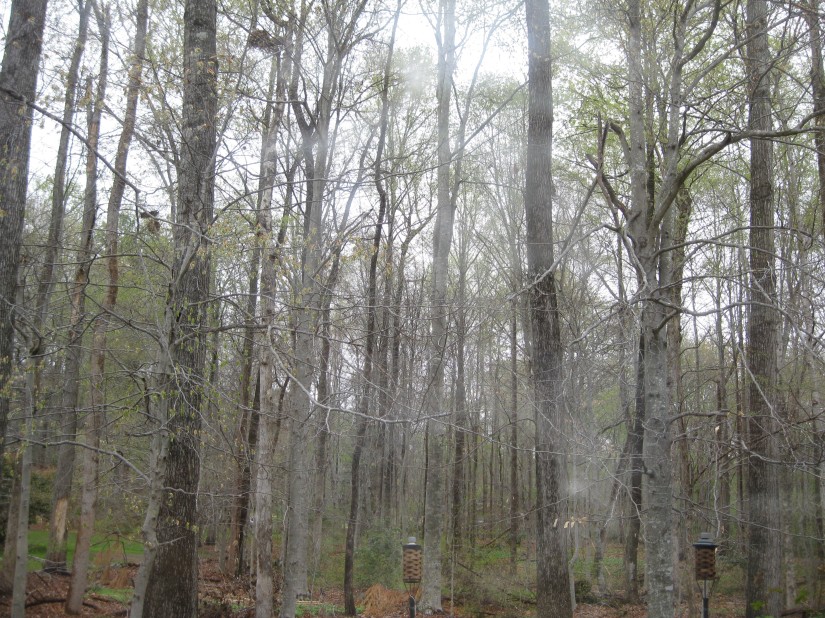 Its been dreary here lately, with cloudy skies and dull gray weather. Bun and I haven’t been going out much and days just seem to blend together into one big lump and I sometimes can’t keep track of what day of the week it is. So thats why I’m doing such a random post, maybe when I look back over this blog sometime in the future, I’ll remember mine and Bun’s lunch from Mar 31 2011.

Today is also dark and gray and we have to have our indoor lights on to cheer this place up a bit. Its also harder to entertain Bun when we don’t get out of the house until late afternoon when its a little warmer. I decided to make my favorite lunch for us today- Eggs and toast- scrambled for Bun and crispy sunny side up for me. Bun eats the same breakfast everyday -oatmeal and banana and I don’t eat breakfast all , I just chug down cups and cups of coffee. But I absolutely love breakfast foods, especially eggs. I’m crazy about eggs just like every single person in my family. We are all as Antony Bourdain would say “egg sluts” and proud of it. Bun used to be very fond of eggs when we first started doing table foods but like every other food he doesn’t seem to care for it too much. I’m hoping this will change soon.

I needed these big bursts up yellow today to brighten up the grays.  Yum Yum Yum Lunch 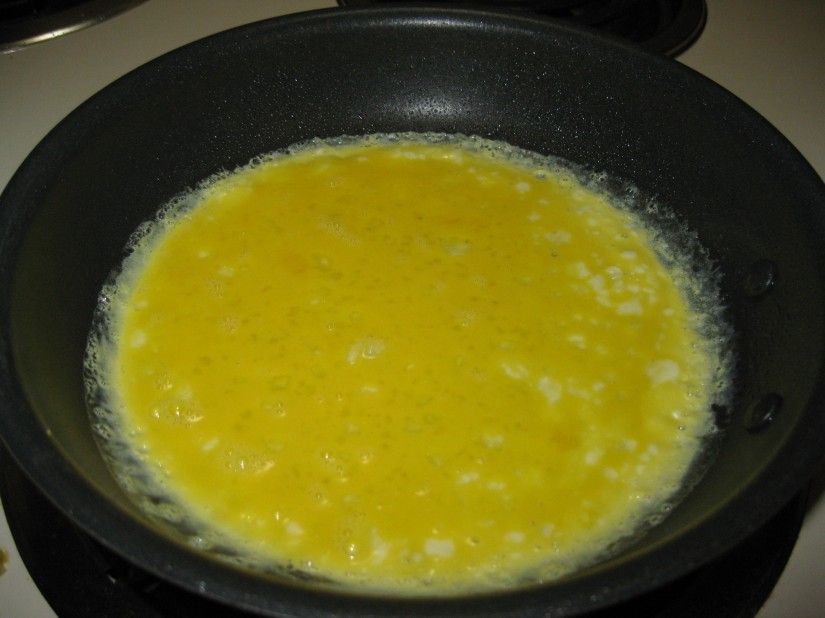 *Outside time is still Bun’s favorite. *

So this post is two weeks too late, but here goes. Bun’s 15 months has been really really fun and also really really challenging.  But geez, how this boy is growing, he is now a full fledged toddler, wanting to walk everywhere, climbing stairs (eek) and exploring the world. At his 15th month check up he weighed 21lbs ( 15th %) and was 27 inches in length (33rd %) and had a head size percentile of 58% so he is still on the smaller side and is a very very skinny boy with a giant head. His pediatrician says that he is growing well and thats just his body type.

Bun is also getting pickier and pickier by the day about what he will eat. The foods he eats are yogurt, fruits, bread and cookies.  I still try valiantly to offer him veggies and pasta and chicken but its pretty much useless. He just shakes his head and says “na na na”

*He has been doing a lot of Baby yoga lately*

The best part about 15 months is Bun’s desire to communicate with words. The favorite word this month is “Done” He uses this word like a pro and uses it to let me know when he is just not interested in doing what I want him to do. His other new words are “Pish” for fish and ‘Kawpee” for coffee, and “Appeeel” for Apple.  He also loves to make animal sounds and truck sounds and his repertoire includes Fire truck, Dump Truck, Truck, Cow, Dog (although his dog sounds don’t sound like any one else’s), Snake, Wolf, Lizard (not really a sound, but he sticks his tongue out), Duck and Birdie. He is currently working on learning hoot hoot for owl. 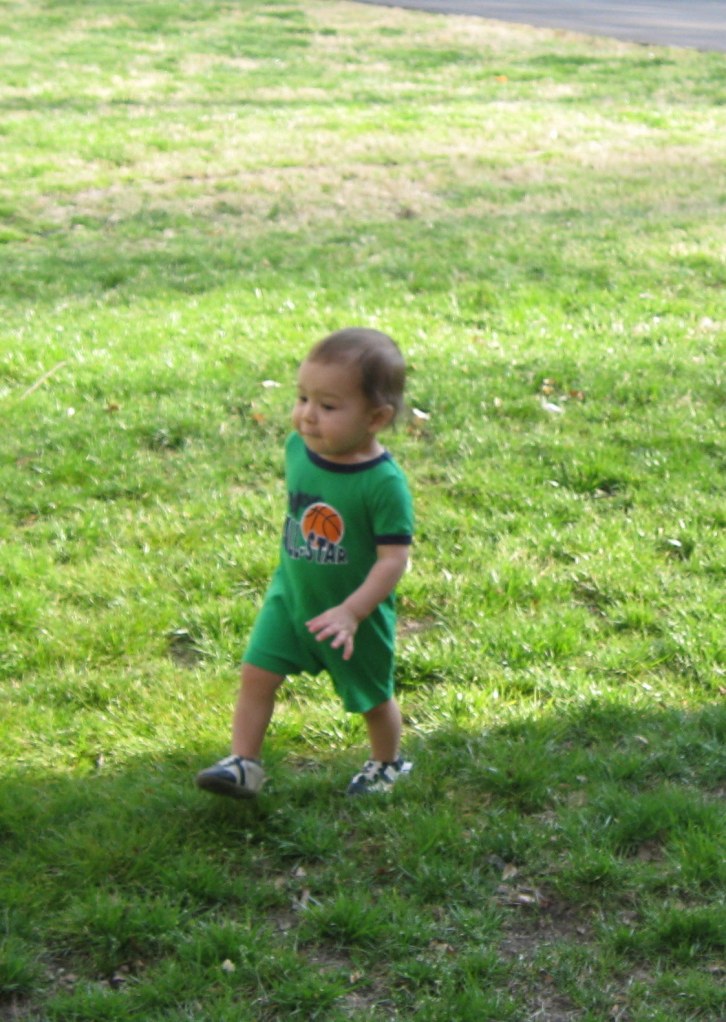 * I had to crop this photo down a lot but I just love his expression as he is stomping around.*

Bun also has been playing two new games with us lately, Ring a Round the Roses and Row Row Row your boat and will occasionally try to do the actions to Itsy Bitsy Spider but he doesn’t have the attention span and just starts clapping after the second line. He is also sleeping really well these day, well maybe not so well for naps but bedtime is such a joy these days. He sleeps from 7:30 pm to 7:15 ish and he loves to cuddle with Scout in his crib before bedtime and he will now actually play quietly in his crib for a few minutes when he first wakes up rather than cry.

*This smile melts my heart*

The downsides of 15 months is the crankiness and whininess and when he wants my attention or a cookie or a book he wants it immediately. The kid has no patience ( I hear this is all toddlers though, so fingers crossed).

*This is the “I’m going to do something naughty” look. I need to get a better picture of this look.*