We spent Friday, Saturday and Sunday of Labor Day weekend camping with my parents in the Tar-Pamlico River basin of NC, at Goose Creek State Park. We chose this place because in spite of only being two hours away from the triangle, it was remote and not super crowded. I had charged my camera the night before but in the rush to get out the door, I forgot to load it in the car. So the photos are from my iphone and my mom’s camera.

Heading out on I-40. Even though it was a very short drive, we did stop for snacks and coffee at Farmville just to get the road trip experience. Highlight of the stop J finding Bud Cheladas. They were perfect in the hot sun when we got into the campsite

Bun was thrilled with the tents. He just wanted to go in and out and in and out and the cuteness wore off once we realized how much sand and bugs he dragged in there with him each time. However, our campsite was quite lovely, very secluded and shady. The bugs were pretty terrible but thats to be expected in a swamp.

THe favorite part of this whole trip was this boating dock that was just steps away from our campsite. I spent a majority of my time hanging out on there and Bun was in toddler heaven because he got to throw an infinite number of rocks into the water

Wading at the river beach!

These shoes went on sale right before our trip! I love them!!! Much more than Bun does 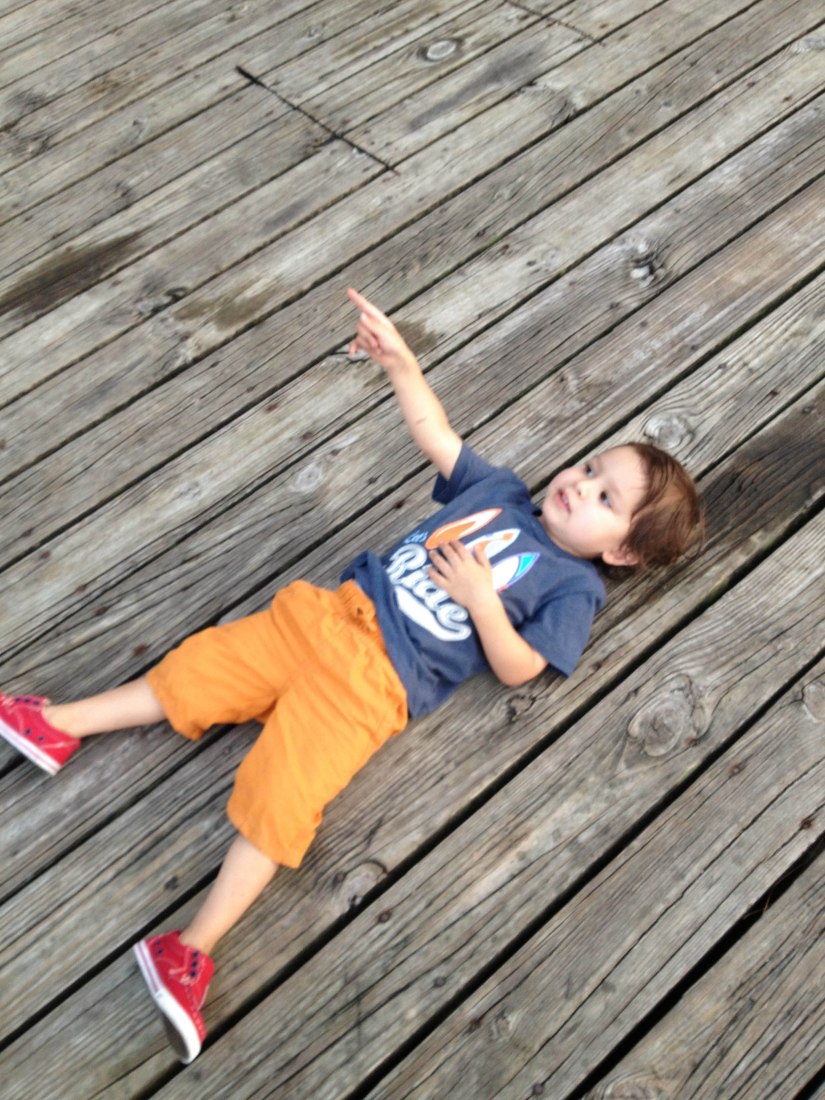 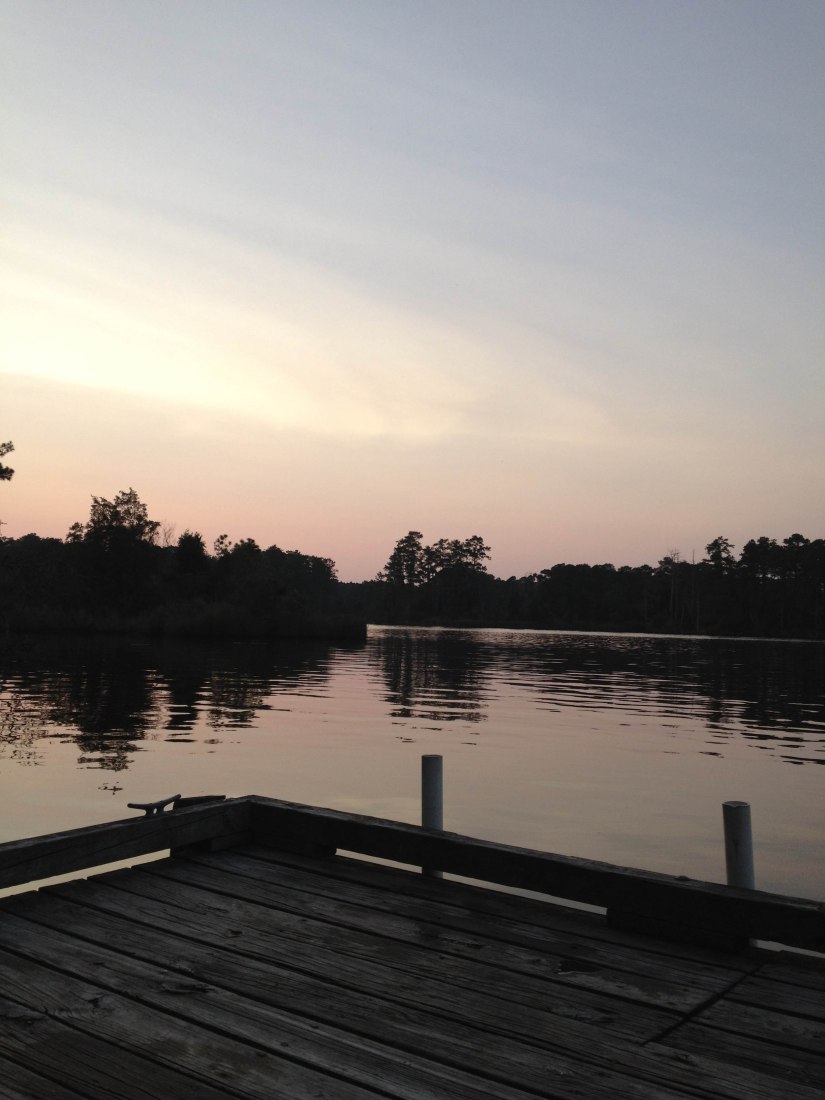 At Sunset Bun and I were the only ones hanging out at the dock and taking in the beautiful sights.  We heard pelicans and herons and there were jumping fish that would leap out of the water to catch the insects. I had no idea that fish could do that. It was amazing to take in all this beauty with my boy. It’s an hour of my life I hope to remember for ever.

Below: Selfie at Sunset and Bun and I .

We finished our night with a delicious dinner of Curried Beef, Grilled Italian sausage and wine. I wish I had pictures of our fire and food but c’est la vie. 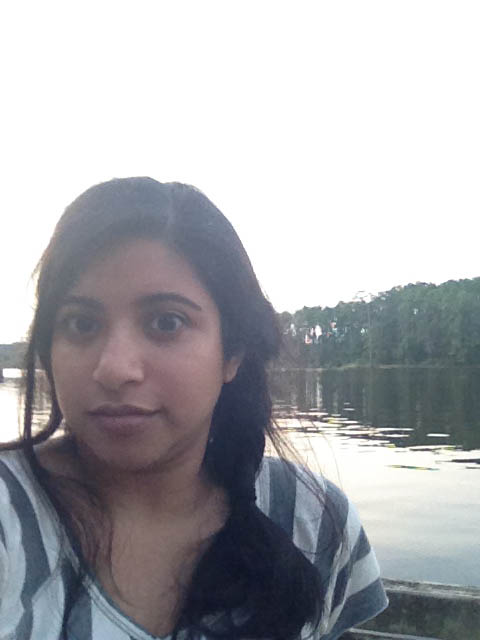 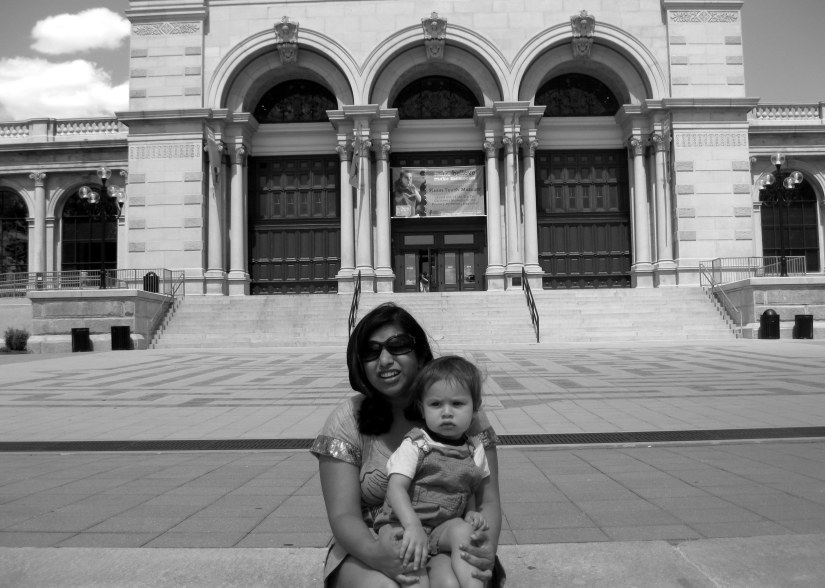 Here we are sitting outside the steps of the Please Touch museum. We loved this kids museum. We have a litte one in Chapel Hill but this was 2 storeys and filled with absolutely super fun exhibits. Both Bun and I are very tired at the end of our play. I also love that the museum is housed in such a cool old building. Its a remnant of Centennial celebrations that were held in Philadelphia. 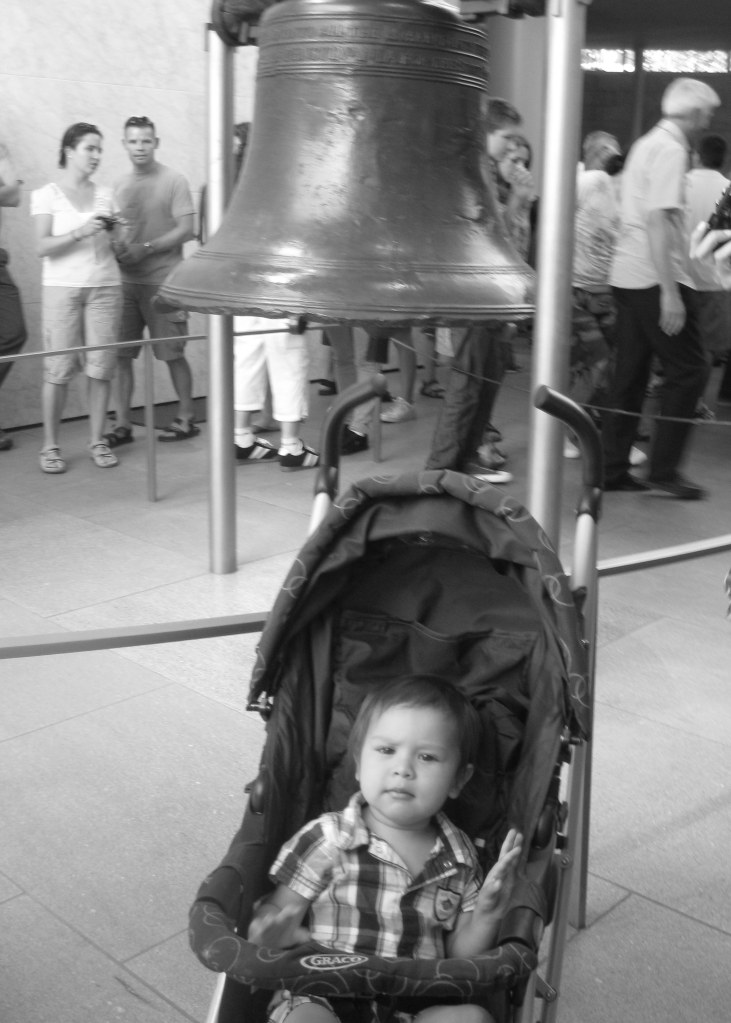 Here is the ultimate tourist photo for Philadelphia- Baby under the Liberty Bell.

Playing in front of Independence Plaza. We toured the building but that was an utter and epic FAIL. We had the meltdown of the century. 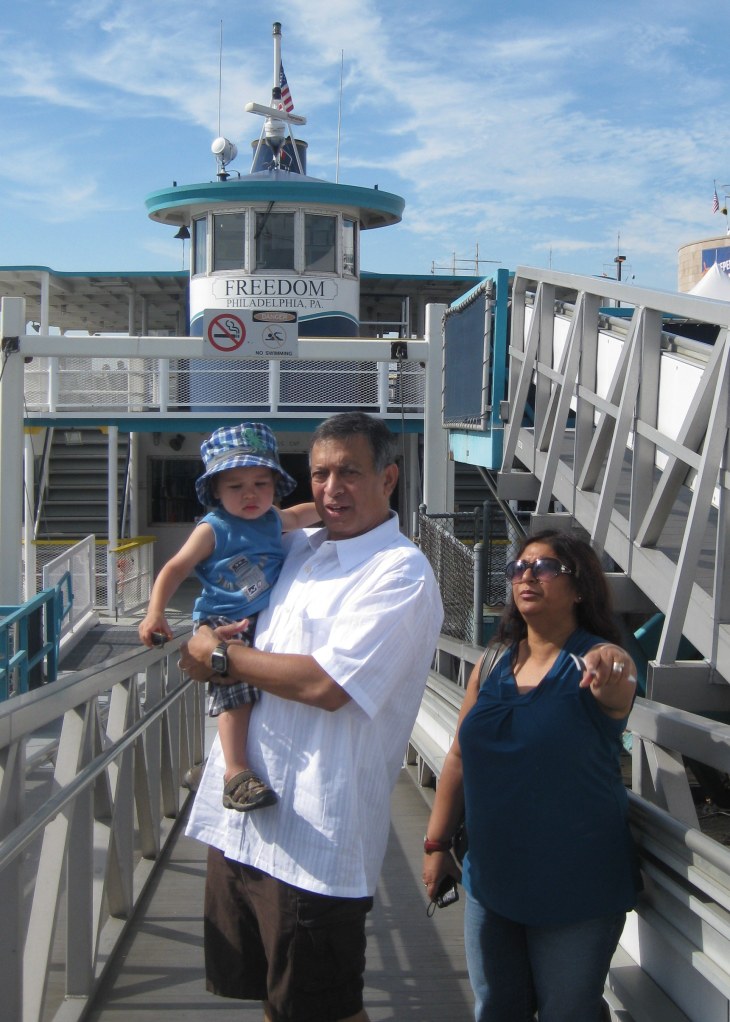 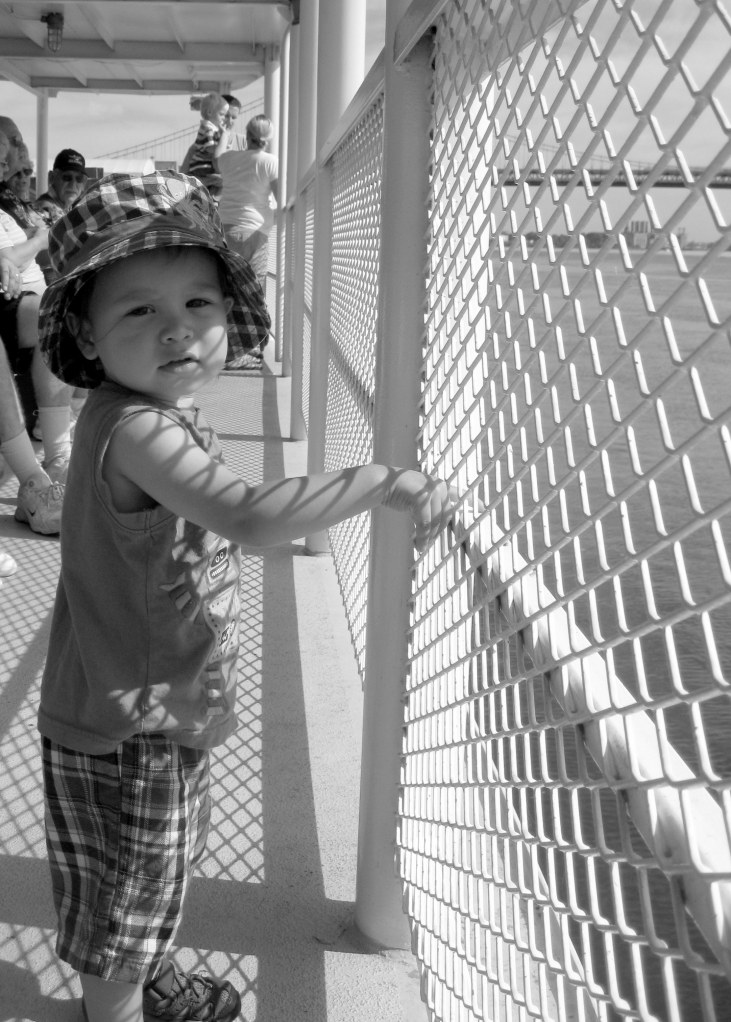 These pictures are from the days we spent in Philadelphia visiting Independence Hall, Liberty Bell and the Aquarium. We also were able to do some shopping at H&M and eat some yummy chicken wings.

Eating breakfast outdoors on the terrace of our hotel. Don’t be fooled by the food on his plate though- Bun only ate the piece of waffle he is holding in his hand 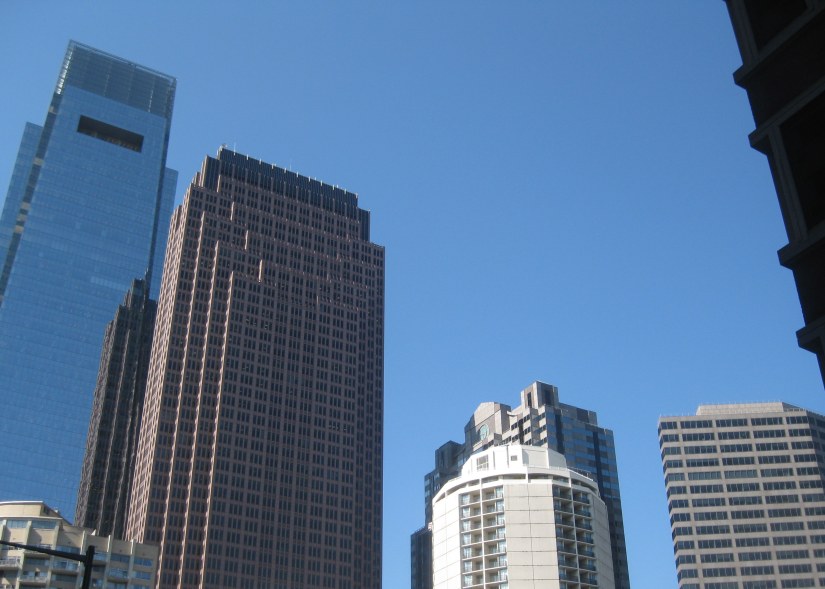 Philly Skyline. Our hotel is the hexagon shaped building with the balconies in the foreground 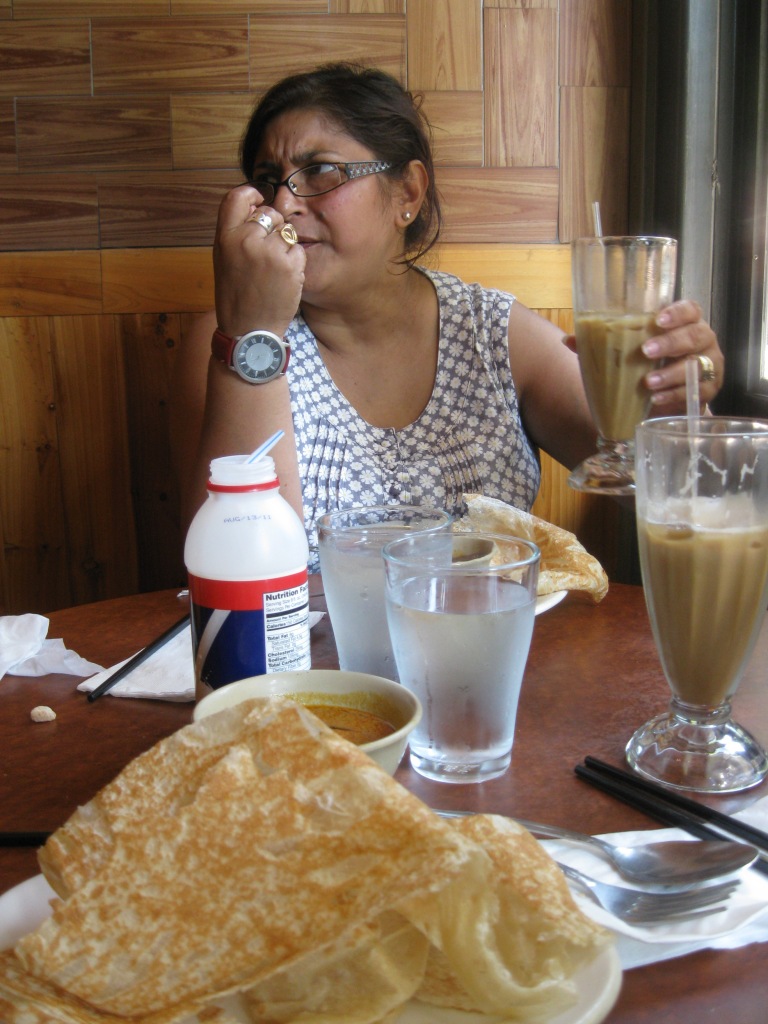 We spent an afternoon at the park around Swann Fountain. The setting sun was beautiful and spray of the fountain felt heavenly

Most of these photos are from our Day 2 in Philly, where we also explored downtown, Chinatown and visited the Philly zoo.

More photos at Part 1 and Part 3

Did I mention I went to Philadelphia recently? It was a birthday present from my parents and I had a wonderful time. It was a little sad because J wasn’t able to go with us since he had a conference in Maine but it was still wonderful to get away and explore a new city.

I was a little nervous about this trip because although Bun does well on airplanes, he had a rough time in our hotel in Columbus. However we had a suite this time so that helped a lot. I didn’t really bother with the pack and play and just did Bun’s bedtime routine and let him fall asleep on the bed on his own. He did such a good job falling asleep in a regular bed that I almost am considering a transition to a big boy bed at home. But thats for another day.

With Dee at the iconic “LOVE” statue in Love Park 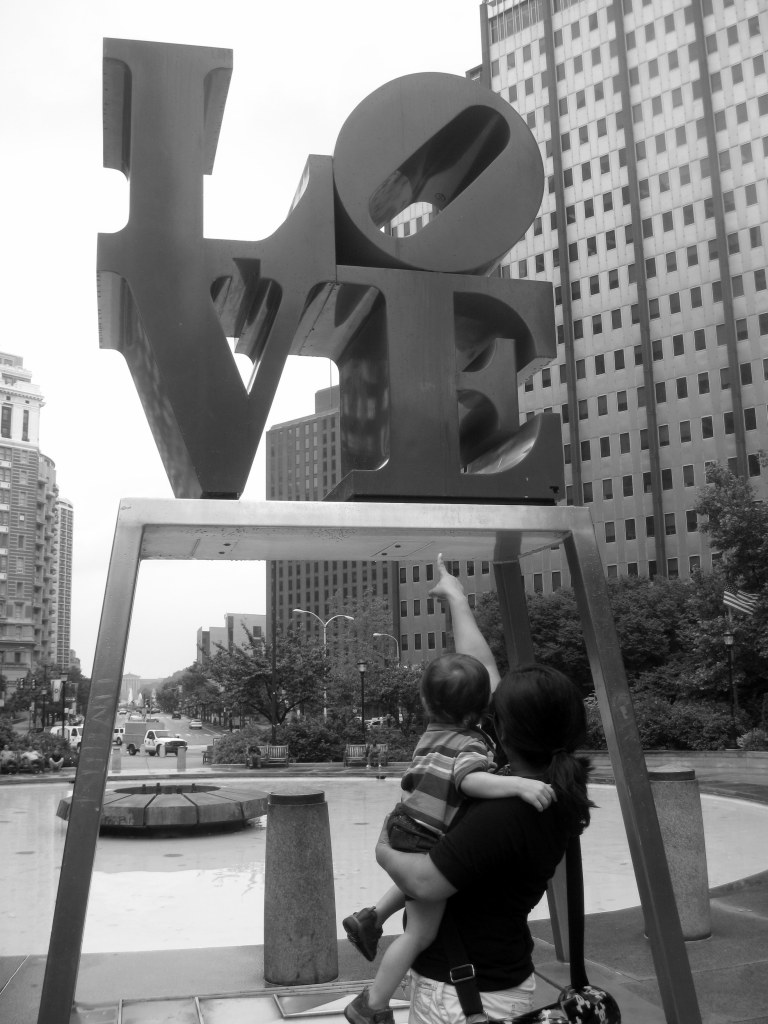 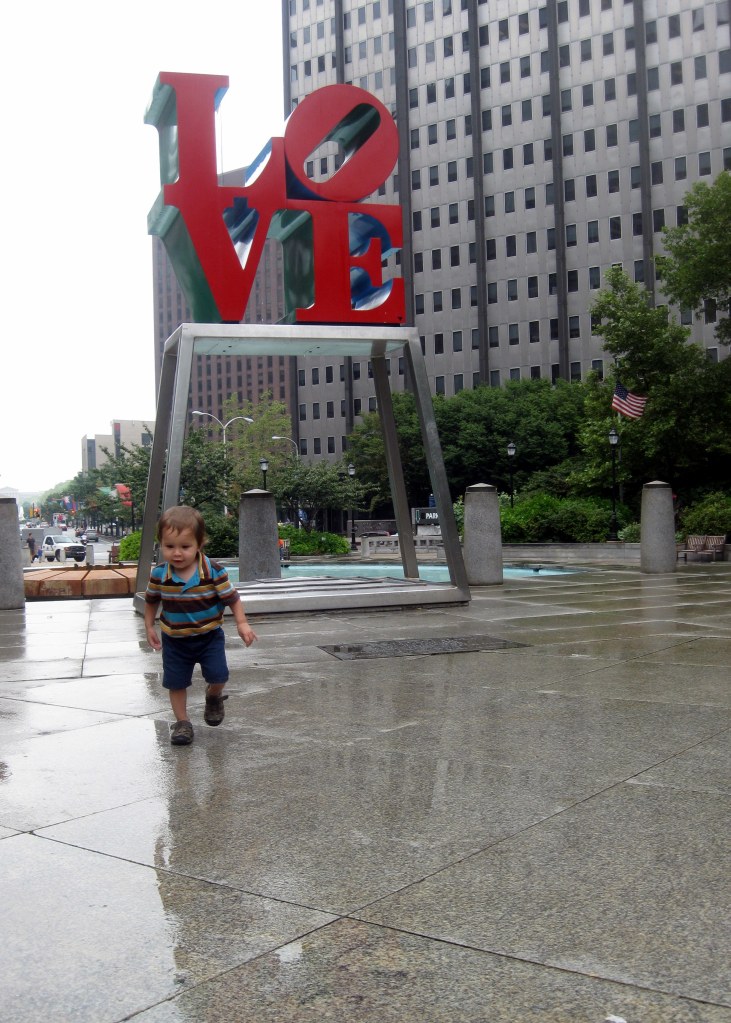 City Hall visible slightly in the background. We were in Love Park, right after a summer shower. The city looked absolutely gorgeous with droplets of water everywhere 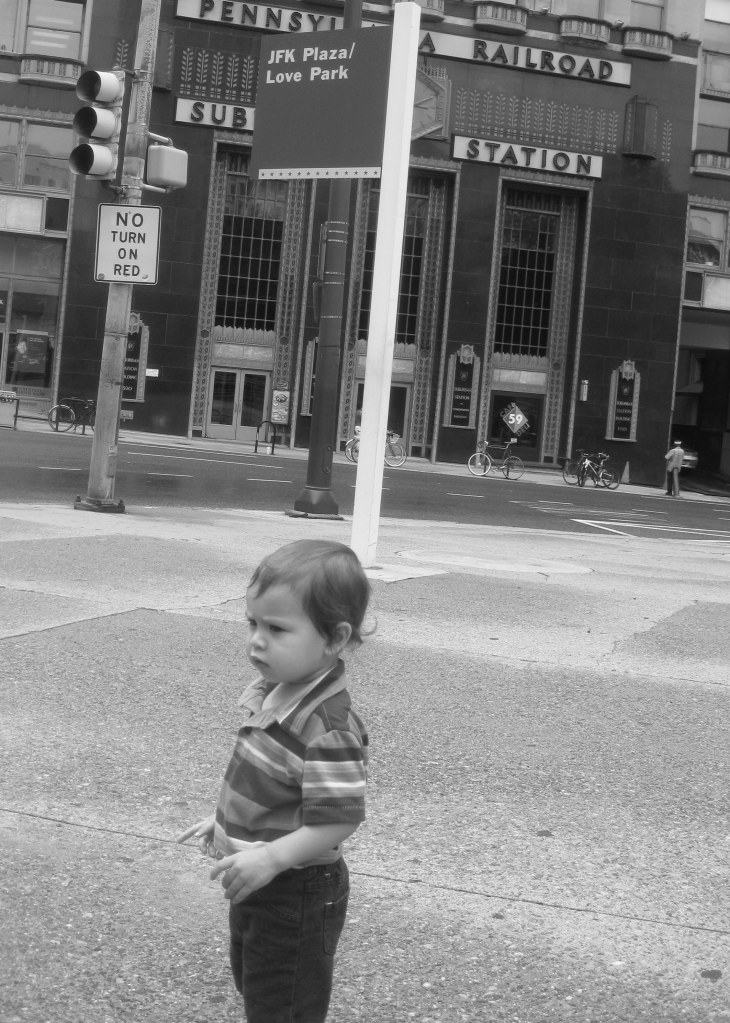 Bun was mesmerized by the cars, buses, trucks, bikes.  The transportation junkie had found his fix.

Wind whipping through our hair. Although his face doesn’t show it in this photo, driving around in the big red bus with an open top was one of his favorite things.

Just love the colors of turquoise against the red brick. Society Hill Neighborhood

View from our hotel room on the 23rd floor. We stayed at the City Center Embassy Suites which really worked out well for us. They were doing some construction and the scaffolding ropes are in the way. The fountain is Swann Memorial fountain depicting the three major waterways of Philadelphia. In the end distance is the very Neo classical looking Philadelphia Museum of Art and also in view is the Philadelphia Free Library.

Bun looking down at the world from Floor 23. He was scared and thrilled all at the same time. The balcony was one of his favorite places to play during the times we were actually in our rooms

More photos can be found at Part 2 and Part 3

While in Columbus, I found out that our hotel was very near to the Columbus zoo and decided to check it out. It was a really hot day and we had very little time so we only decided to hit up a few exhibits, but turns out even that was too ambitious. It was very very crowded and it was almost impossible to get close to the exhibits.

However, the Gorilla exhibit was fairly deserted when we got there and I was able to let Bun out of his stroller and run around. It was one of our favorite parts of the zoo trips. The other favorite was a little animal show they had where they had rescued dogs, cats and some animals do fun tricks.

Bun recognized the gorillas as monkeys and made his monkey noises but he kept pointing at them and saying “baby baby.” I don’t know if he feels some sort of kinship with them but watching a mama gorilla cuddling a baby, I definitely felt a connection. I’m not saying, I recognized her as my long lost ancestor or anything like that but I could relate to the maternal feeling even in an animal. The way she groomed her baby by nibble on his face was almost identical to how I almost can’t help myself and nibble and nuzzle on Bun’s cheeks, nose, ears any chance that I can. It really reinforced my belief that a mother’s love is probably one of the most primal feelings we have, perhaps even more so than the preservation of the self.

Okay, so I guess this post got kinda sentimental- not where I had originally intended it to go.

I was sitting at my desk thinking wistfully that this time last week , I was in Nassau, tipping over a jet ski and that motivated  me to update my blog about our fun cruis to the Bahamas and Florida.

J and I had the best time and it was super special cuz we took this trip to celebrate our one year anniversary and also have super late honeymoon. We did loads of fun things like

We went on a jetski

I fell off a jetski and then a little while later, J was showing off so he flipped the Jetski and both of us were in the water

Saw some of the most gorgeous sunsets from our ship

Got into Atlantis for free and saw their sharks and stingrays

Laid out on the beach and just relaxed.

Our stateroom, it was tiny but really cozy and we loved looking out of our porthole every morning.

The main centrum of the ship,I thought it was really pretty. 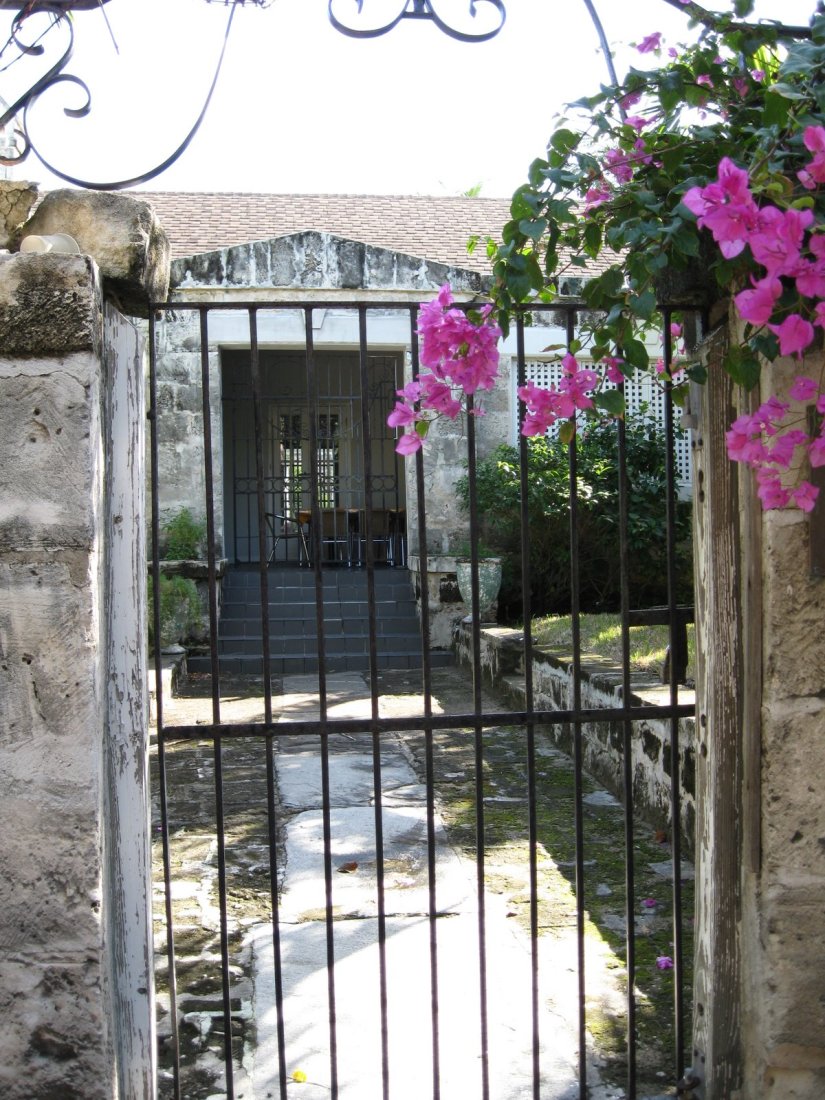 There’s a little plaque next to this gate that says “Central Bank of Bahamas”. This must be their old office because the only security it has was some barbed wire.

I love the color of the water in this photo. Also this pic is taken after we had snuck into Atlantis. Yay!

Those Conch fritters were damn tasty. To me it tasted like a mix between shrimp and oyster and then they were deep fried in dough and served with fry sauce! So delicious

One of the many cool sunsets, this one is looking over downtown Nassau

Other cities have pigeons that roam around freely in public spaces, in Key west its Chickens!

Our Ship is so cool!

So J and I have now completed one year of marriage. To celebrate, we are going on a 4 night cruise to the Bahamas and Key West. We will be travelling from Jan 19th through the 23rd and our tickets have already been bought. It was our anniversary present to ourself. We will be sailing on Royal Carribean’s Majesty of the Seas

Our itinerary is Miami-Nassau-Cococay Islands-Key West -Miami. I am so excited for this trip and to go snorkeling and doing other fun water activities.

Some photos of CocoCay , Nassau and Key west-

With J gone, its been a dull few days around here, but I’m finally all cheered up because I leave for Freeport Maine today. I am really excited for this little quick getaway and to see the beautiful Maine fall. I am also really excited about Maine’s coast and I’m planning on taking a little ferry ride to see some seals and birds. I’ll post photos when I’m back!

It turns out I won’t be going to UT in september with J after all but I didn’t want to spend two weekends all alone in Durham so my parents have taken pity on me and taking me to Maine with them for a weekend. We wont’ be travelling a lot since we’ll be visiting with my aunt and since she is not very well at the moment, we’ll probably keep things on the quieter end,but I’m really excited about fall in Maine. I’m sad J won’t be able to go though, because Fall in New England seems like one of those classic romantic moments but I’m sure we’ll go together some day. I’m just excited that I’ll be getting a little fall trip.