Saturday was the day of the actual wedding for my nonod and her fiance. The day started out really cold and chilly and by mid morning we had freezing rain coming down. After breakfast, I headed out to the Ranch where Nonod and Nondoi(younger sister in law’s husband) were getting married and helped decorated the arch that was going to be their backdrop. Their original plan had been to marry in a pasture, have dinner in the little Ranch cafe and they also had a tent set up for their band and the dance floor. However b/c of the weather they decided to scratch the pasture idea and just get married in the tent. 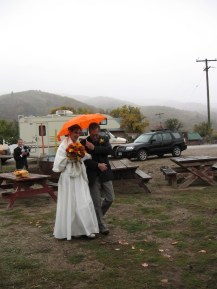 The bride walks in with an orange umbrella! So cute!

The wedding was at 4 in the afternoon, it was freezing by now and we were all bundled up in our warmest winter gear instead of dressy wedding clothes. J was in the wedding, so I was in charge of taking pictures for two people in the wedding. The bride walked in to everyone in the audience playing “here comes the bride” with their little kazoos. The ceremony was beautiful and silly and just amazing. Afterwards, the bride and groom also walked out to kazoo accompaniement.

After the wedding, the family took pictures and i used to this opportunity to snap some shots of the nearby animals and farms until it was time for dinner. For dinner we had BBQ chicken , baked beans and baked potatoes , it was delicious. We also did the toasts and cake right after the dinner was over and then it was off to hear the band.

J and I in front of the Ranch stables

The band was a local bluegrass band and they were a fun bunch of guys. Other than bluegrass they also played some classic rock and country and pop. J was super sweet and even slow danced with me a couple of times. After the band was done, we hung out by the fire pit for a little while and gave a ride to some people and finally ended the night. They had a lovely wedding and we were so glad to be a part of their day.

1 thought on “The Country Western Wedding”